Twelve Years of Turbulence: The Inside Story of American Airlines’ Battle for Survival
Former American Airlines General Counsel Gary Kennedy and journalist Terry Maxon recount the challenges and crises American faced during the years following the tragic attacks of 9/11, during which American Airlines lost billions as it struggled to avoid bankruptcy. The company finally had to file for bankruptcy, but merged with US Airways and concluded one of the most successful bankruptcies in U.S. history. 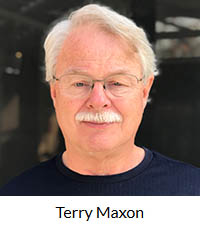 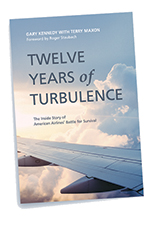 Bio of Gary F. Kennedy
Gary F. Kennedy served as the Senior Vice President, General Counsel and Chief Compliance Officer of American Airlines and AMR Corporation from January, 2003 until his retirement in January, 2014. As General Counsel, Kennedy guided the airline through two of the most high profile events in the company’s history - the 2011 bankruptcy filing and the 2013 merger with US Airways. Mr. Kennedy directed the efforts to obtain government approval of the merger, including the defense of lawsuits filed by the Department of Justice and multiple state attorneys general, and was called upon to testify before Congress to garner support for the merger.

Prior to his role as General Counsel, Kennedy served as Vice President of the real estate and construction department at American. With billions of dollars at stake, Kennedy was the chief strategist for the lease and construction of the company's airport facilities, maintenance facilities and office buildings worldwide.

Mr. Kennedy serves as a member of the Board of PIMCO Funds, one of the country’s largest open-end fund complexes. In that capacity, he serves as co-chair of the valuation oversight committee and is a member of the audit and governance committees. Mr. Kennedy also serves on the Board of the Marconi Group, a patent management company located in Dallas, Texas. He also served as an adjunct professor of law at Southern Methodist University and Texas Wesleyan University.

Mr. Kennedy is the author of a new book, published in February 2018, titled Twelve Years of Turbulence, the Inside Story of American Airlines’ Battle for Survival.

Kennedy and his wife have four children and live in Dallas, Texas.

Bio of Terry Maxon
Terry Maxon is an award-winning journalist who wrote for newspapers in Dallas, Oklahoma City, and San Jose, Calif., for 42 years. He started out at the bottom as an obit/rewrite reporter for the Oklahoma Journal and covered Oklahoma City government and Oklahoma state government before becoming assistant city editor and city editor.

After a brief stay in California and the San Jose Mercury News, Maxon returned to the Dallas Morning News in 1990 where he covered technology, legal affairs, energy and, for some 20 years, airlines and aviation. He retired from the News in September 2015. Twelve Years of Turbulence is his first book.
Do NOT follow this link or you will be banned from the site!