A great place to start is to read NCBJ President Michael Romero’s invitation to attend the Conference, which you can find on the Blog HERE. It gives you a peak at what to expect.

You will find new articles on the Blog about Conference programs, San Antonio, the NCBJ, and much more. Many articles include photos or other images. Please note that you can enlarge an image by clicking on it.

Keep checking back to the Blog to read more posts.

(Click on the name of an article in blue print to read it; click on a picture to enlarge it)

Recognize a Peer for Dedication to the Rule of Law

Are you interested in an annual consumer bankruptcy meeting at the NCBJ Conference?

How to End a Networking Conversation

Battle for Texas: The Experience

Story of the Battle of the Alamo

Remember the Alamo!  That phrase became the battle cry of the Texans in their struggle for independence.  Today, the Alamo is just a part of the rich history of San Antonio, the host for this year’s NCBJ Conference to be held October 28-31, 2018.  San Antonio is celebrating its tricentennial this year and it is the perfect time to join in the celebration and at the same time enjoy everything you have come to expect from an NCBJ experience.

Our Education Committee made up of bankruptcy judges, legal scholars and preeminent professionals and headed by John Hoffman is preparing special programs that will educate and entertain.  As a special treat, our plenary programs will be held in the spectacular Lila Cockrell Theater, immediately adjacent to the host Marriott Rivercenter and the subsidiary conference Marriott Riverwalk hotels.

If that were not enough, there will be an international discussion presented in partnership with the American College of Bankruptcy.  Our affiliates will also be offering their usual incredible programs.  Finally, we are trying to create even more networking opportunities with all your fellow attendees.

To put it simply, come this October, you will remember the Alamo, the City of San Antonio, and the 92nd NCBJ Conference.  Don’t miss out on this special opportunity.

Premiering in San Antonio, the NCBJ Plenary Sessions will be available to all insolvency professionals via live streaming on the Internet.

Monday, October 29 and Tuesday October 30 from 9 am – 12:30 pm CDT, and Wednesday, October 31st 9 – 10 am, five NCBJ educational sessions will broadcast from the Lila Cockrell Theatre in San Antonio, Texas.

CLE is available, including 1 ethics credit for these programs. Written materials available on NCBJmeeting.org on the Education Tab. Password:  Alamo
Some states consider online education to be self-study. Consult your state bar for guidance.

With the 2018 National Conference of Bankruptcy Judges fast approaching, Pachulski Stang Ziehl & Jones is pleased to once again host the official NCBJ “After Party.” PSZJ, the nation’s leading corporate restructuring boutique, has hosted the event since 1999, and is well known in the bankruptcy and restructuring community for its fun and memorable themed parties.This year’s National Conference of Bankruptcy Judges Conference will take place from October 28 – 31 in the beautiful city of San Antonio, and what better way to celebrate than a PSZJ festival? See below for pictures from our previous events. 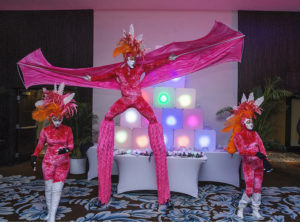 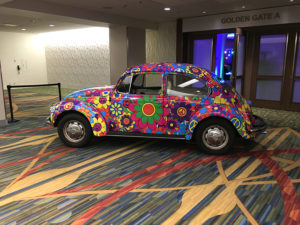 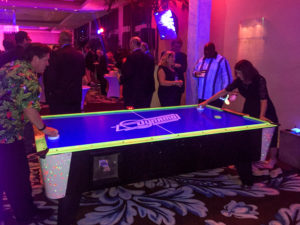 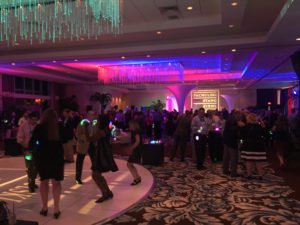 There has been interest expressed in creating an annual “Consumer Bankruptcy Meeting” during the annual NCBJ conference. To that end, we have planned a “meet and greet” on Monday October 29 right after the NCBJ, UST, NABT, NACTT Joint Committee Meeting in the same conference room (13‐14). The meeting would start at 3:45 pm and its purpose would be see about the formation of an annual open meeting on consumer related bankruptcy issues at future NCBJ Conferences. The idea of the annual meeting is to have representatives from the various consumer related groups, such as the Trustee groups, NACBA and the National Creditors Bar Association and anyone else that is interested, present to discuss focused topics affecting the consumer bankruptcy practice on a national level.

The meeting on the 29th should not be a long. It is simply an opportunity to discuss whether such a future annual meeting is possible and if so, to gather thoughts on how should it be conducted.

On Tuesday, October 30, 2018 at 7:15a.m., NACBA will hosting an educational breakfast for all to attend. The topic will be: Leaving Student Loan Discharge Behind: Defining Student Loans, Treatment in chapter 13, and Non-bankruptcy Options.

With discharge of student loans under the undue hardship standard often requiring a “certainty of hopelessness”,  this panel will instead focus on alternative methods that debtors and courts have addressed the ever mounting student loan crisis. This will include an examination of what actually constitutes an “educational benefit”,  how the various repayment programs from the Department of Education can be integrated with bankruptcy, and non-bankruptcy causes of action and defenses,  including Statutes of Limitation, burdens of proof regarding standing and consumer protection laws,  can be used to provide borrowers relief.

San Antonio’s population has grown from under 3,500 in 1850 to the seventh most populous city in the United States today.  Only New York City, Los Angeles, Chicago, Houston, Philadelphia and Phoenix have larger populations within city limits.

In 1860, with a population of 8,235, San Antonio was the largest town in Texas (ahead of Galveston).  Until 1877, German was the predominate language.

This chart shows the population of San Antonio since 1850 and the City’s population ranking among all United States cities.

San Antonio’s population is concentrated within its city limits.  Its metropolitan area does not rank nearly as high.

The genesis of San Antonio HemisFair Park, located along the River Walk, was a World’s Fair held in San Antonio known as HemisFair ’68.

San Antonio was chosen as the site of the 1968 World’s Fair, to be called HemisFair ’68.  The fair, themed the “Confluence of Civilizations in the Americas,” paid tribute to the 250th anniversary of the founding of San Antonio in 1718.  Six million visitors from more than thirty nations attended the fair from April 6 through October 6, 1968.

More than 130 structures were built on the 96.2 acre HemisFair ’68 site at a cost of $156 million.  The State of Texas Pavilion cost $10 million. The United States Pavilion cost $7.5 million.  The 750-foot Tower of the Americas was the fair’s theme structure, complete with a glass elevator rising up the side and a 360° observation deck at the top.  The River Walk was extended to reach the site.

In celebration of the 20th Anniversary of HemisFair “68, San Antonio redeveloped approximately 15 acres of the site to create an urban park with waterfalls, fountains, playgrounds and lush landscaping. Sone of the original structures were renovated.  Part of the United States of America Pavilion building is now home to the John H. Wood, Jr. United States District Court for the Western District of Texas. Another part of the pavilion is now the Adrian Spears Judicial Training Center.  The site was re-christened “HemisFair Park” in April 1988,

In 2008 Hyatt Hotels completed construction of the Grand Hyatt San Antonio in what was part of the convention center theater originally built for HemisFair ’68.  In 2009 the San Antonio City Council created a non-profit organization, HemisFair Park Area Redevelopment Corporation, to oversee further redevelopment of the fair site.  In 2012 HPARC completed the renovation of three additional structures on the site. 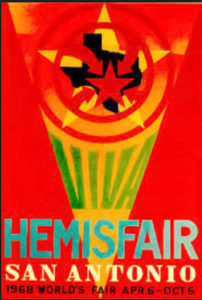 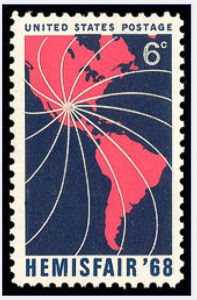 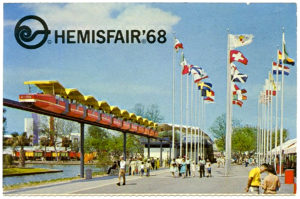 HemisFair ’68 Trivia (reprinted from a posting on the web)

The NCBJ Public Outreach Award will recognize public outreach achievements of individual NCBJ members and bankruptcy courts. The award recipient s will be selected by the Public Outreach Committee based on nominations received from NCBJ members. Qualifying public outreach activities and programs include those related to community service, civics or court system education, and bankruptcy or financial education. Among the considerations for this award are:

• The extent to which the nominee’s public outreach activities involved, increased the profile of, or affected the bankruptcy courts

• The extent to which the nominee’s public outreach activities involved, increased the profile of, or affected the federal courts generally

Nominations should describe the nominee’s public outreach activities and explain why the nominee deserves to receive the NCBJ Public Outreach Award, addressing the above factors specifically and including any other factors that demonstrate why the nominee deserves to receive the award. Nominations should also include any recognition the nominee has received from the community and/or the media and may include copies of relevantarticles or photos. Descriptions should be detailed enough to give the Public Outreach Committee an accurate picture of the nominee’s community outreach activities.

<blockquote>
Deadline for Entries and Presentation of Award.</blockquote> All submissions must be sent electronically to NCBJ.Public.Outreach@gmail.comon or before August 1, 2018. The award will be given at the Annual Meeting. Contact any member of the Public Outreach Committee with questions.

You know how to start a networking conversation – but – you might hang back because you are not sure how to exit when the time is right for you. Here’s a polite, professional way that doesn’t involve a lot of excuses or cringe-worthy pauses.

Ask for a business card. In the age of social media, it’s a step you might often skip. It’s a pleasant want to get the person’s contact information, and in the Americas it signals that the time together is ending. It’s easy to close with “nice to meet you” and move on.

If you really want to continue the conversation with this person in the near future, ask about scheduling a phone call, meeting, coffee or lunch in the future. If the other isn’t eager to do any of those, it is a polite signal that they are ready to move on also.

Among the works of the many local artists who’ve contributed to the Henry B. Gonzalez Convention Center’s art collection, meeting delegates will find a variety of cultural expressions that reflect the authentic culture of San Antonio.

“The art collection which brings the voice of San Antonio to the world stage, engages visitors visually and sparks conversations that bring people together,” says Patricia Muzquiz Cantor, interim director for the city of San Antonio Convention & Sports Facilities.

Among the pieces that will have people talking is a Carlos Merida mural created for the 1968 World’s Fair that will greet NCBJ visitors at the convention center’s new West Entry. From the River Level, look up high on the Center’s exterior wall. Another is one of the newest installations, Liquid Crystal, a 30-foot tower of LCD panels connected to motion sensors that allows it to reflect the activity in the new main lobby.

May 2nd from 1- 5 EDT could have a big impact on your legal career. Those few hours are the only time that applications are accepted from early career lawyers who want a chance to be part of the NCBJ Next Generation Class of 2018. Look HERE  for information about Next Generation.  Everything you need to know to apply is on this website.  Next Gen delivers loads of unique opportunities and benefits.  Members of the Class are chosen by computer randomized selection.  Nominations are only accepted May 2, 2018 from 1- 5 pm EDT.  Don’t be early or late or submit more than once – as the software will disregard your paperwork. Good luck!

NCBJ Next Generation is an amazing opportunity for bankruptcy practitioners with 5 to 10 years of experience.  As stated in more detail on the NCBJ NextGen website, the program includes: