Luncheon tickets for purchase through NCBJ conference registration. Attendees purchasing registration packages that cost $1065 or more, may choose any one Luncheon Program to attend at no additional cost. Registrants may also purchase additional luncheon programs for $90 each. 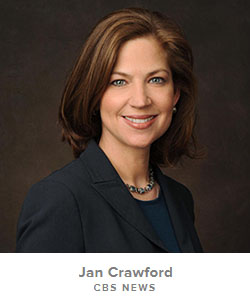 Jan Crawford is CBS News' chief legal correspondent and contributes regularly to the "CBS Evening News", "CBS This Morning", and "Face the Nation", as well as CBS News Radio and CBSNews.com.

Crawford is a recognized authority on the Supreme Court whose 2007 book, "Supreme Conflict: The Inside Story of the Struggle for the Control of the United States Supreme Court" (Penguin Press), gained critical acclaim and became an instant New York Times Bestseller. She began covering the Court in 1994 for the Chicago Tribune and went on to become a law and political correspondent for all ABC News programs, a Supreme Court analyst for The NewsHour With Jim Lehrer on PBS and a legal analyst for CBS News' "CBS Evening News" and "Face the Nation." She has reported on most of the major judicial appointments and confirmation hearings of the past 15 years and amassed crucial sources in the White House, the Justice Department and Congress along the way.

Chief Justice John Roberts granted his first network television interview to Crawford, just one of the rare interviews she was able to obtain with a total of five of the Court's current members, as well as retired Justice Sandra Day O'Connor. Crawford also sat down with then-86-year-old Justice John Paul Stevens in his first television interview, as well as Justices Clarence Thomas, Antonin Scalia and Stephen Breyer.

Crawford's in-depth reports on the Bush Administration's legal war on terror and her exclusive reports on controversial interrogation techniques used for terror suspects have received wide acclaim and been credited with being a catalyst for congressional hearings. Washingtonian Magazine named her one of Washington's top journalists.

Crawford began her journalistic career at the Tribune in 1987, joining the legal affairs beat in 1993, after her graduation from the University of Chicago Law School. The newspaper awarded Crawford its highest award in 2001, for her role on a team of reporters covering the presidential election of 2000, and the legal battles over the White House. She won the same prize for her 13-part series on the post-civil rights South, a project that brought her back to her native Alabama.

Crawford graduated from the University of Alabama in 1987. She has taught journalism at American University and frequently speaks about the Court to universities, law schools, legal organizations and civic groups across the country. She is a member of the New York Bar. She and her family live in Washington D.C.