For what is sure to be a wide-ranging and engaging conversation, join these Colorado judges at the NCBJ 93rd Annual Conference in Washington DC on Friday afternoon. Your NCBJ badge is your admission to this session. 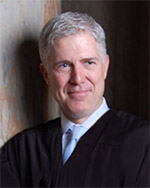 Neil M. Gorsuch, Associate Justice, was born in Denver, Colorado, August 29, 1967. He and his wife Louise have two daughters. He received a B.A. from Columbia University, a J.D. from Harvard Law School, and a D.Phil. from Oxford University. He served as a law clerk to Judge David B. Sentelle of the United States Court of Appeals for the District of Columbia Circuit, and as a law clerk to Justice Byron White and Justice Anthony M. Kennedy of the Supreme Court of the United States. From 1995–2005, he was in private practice, and from 2005–2006 he was Principal Deputy Associate Attorney General at the U.S. Department of Justice. He was appointed to the United States Court of Appeals for the Tenth Circuit in 2006. He served on the Standing Committee on Rules for Practice and Procedure of the U.S. Judicial Conference, and as chairman of the Advisory Committee on Rules of Appellate Procedure. He taught at the University of Colorado Law School. President Donald J. Trump nominated him as an Associate Justice of the Supreme Court, and he took his seat on April 10, 2017.