Please be advised that Reagan National Airport is currently undergoing a phased restoration called Project Journey. Before traveling, we recommend you view all construction advisories at Reagan Airport.

How to Get To/From Reagan Airport
Reagan Airport is accessible via its own Metro stop on the Blue and Yellow lines. To catch a taxi, look for the official taxi stand outside of baggage claim (a ride into downtown DC will cost about $15-20). Rideshare apps like Uber and Lyft are also good options to get to and from the airport. 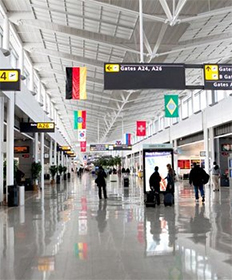 How to Get To/From Dulles Airport
Dulles Airport has a dedicated access road that makes getting to or from the airport efficient via car, taxi or airport shuttle. Washington Flyer taxi cabs exclusively service Dulles Airport. Taxi stands are located outside the main terminal and a ride into DC will cost about $60-$70. 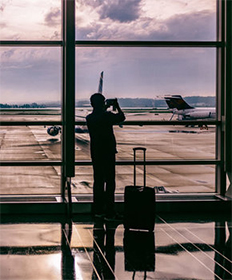 Baltimore/Washington International Thurgood Marshall Airport (referred to as BWI Airport) is a bit further from DC near Baltimore, Md., but oftentimes that means you can find even better flight deals. The airport has grown to 90-plus domestic and international destinations and services more than 25 million passengers each year.

How to Get To/From Baltimore/Washington International Airport
BWI Airport is located 32 miles from DC and is accessible via an MARC/Amtrak train route that picks up and drops off at Union Station. Taxis, Uber and Lyft are also available at the airport.

Drive time from BWI to the Marriot Marquis is a minimum of one-hour and with traffic could be longer.