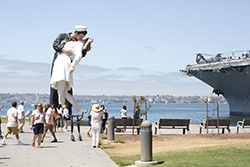 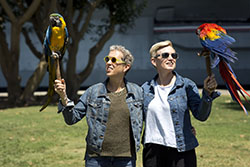 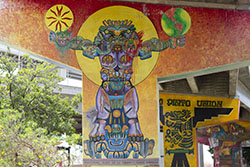 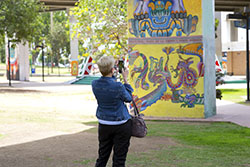 Tuna Harbor Park and USS Midway
Tuna Harbor Park is located on Harbor Drive less than a mile from the Marriott Marquis. This picturesque setting is known for is many sculptures, especially “Unconditional Surrender” (the “kissing” statue), and its scenic bayside and USS Midway backdrops. Wander the grounds, buy a few souvenirs, or have you picture taken with some of the troubadours wandering the park. Just a few steps past Tuna Harbor Park on Harbor Drive is the USS Midway Museum. This decommissioned aircraft carrier is open daily from 10 am to 4 pm.

Travel + Leisure Magazine Suggests...
When visiting San Diego, stroll among the largest collection of Chicano murals in the world. San Diego’s Barrio Logan began with paintings of enormous murals on the pillars beneath the Coronado Bridge in the area now called Chicano Park. Today the historic neighborhood is home to artists, designers, galleries, and a growing display of public art. Authentic Mexican food is another good reason to visit Barrio Logan.