wine and wind on the bay - cruise the s/y america 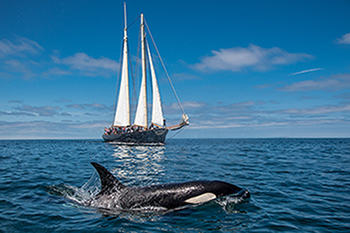 Without exaggerating, S/Y America is the world’s most famous racing yacht! The reason is simple: The original America put yachting on the map. The America’s Cup was named after this vessel (not the country).

It is also one of the most beautiful yachts in the world. Decked out in Old World splendor, with teak decks and polished wooden furniture, you will feel as though you have been transported back in time to the Victorian era.

You will set sail from the Marriott Marquis Marina enjoying the sights (and a variety of wines, beers, and sodas) as we traverse the sparkling water of San Diego Bay. With luck we may see dolphins, sea lions, or perhaps even whales!

NCBJ participants will have the option of helping sail the vessel, raising sails, steering, handling lines… or just lounging about the decks enjoying libations and the beautiful bay. Be prepared for a 3-4 hours of breezes, a salty tang to the air, and sunshine! Bring sneakers or rubber-soled shoes, sunscreen, a hat, sunglasses, and a windbreaker…. and your sense of adventure!

You will board America from the Marriott dock immediately after the educational lunches at 3:15 pm, with departure from the marina dock at 3:30 pm. Return to the hotel about 6:30 pm. Note: Space on this activity is limited, so sign up early! 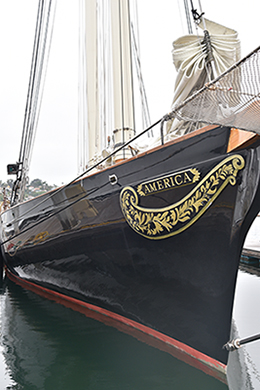 S/Y America History
In 1851, a boat named America won the "Royal Yacht Squadrons" 100 Guinea Cup, given to the winner of a race around the Isle of Wight. It is said that the margin was so great that watching America sail past the royal yacht, Queen Victoria famously asked "Who came second?"

"Your majesty… there is no second," was the reply. The winners, members of the New York Yacht Club, donated the trophy to the Club, to be held as a "challenge" trophy. It is why the most famous trophy in sailing is called The America’s Cup.

Her later career was equally as colorful – conveyor of secret agents, Confederate blockade runner, Union warship, Naval Academy training vessel, and the pride and joy of a famous Civil War general and politician. By her end in 1945, she was one of the most honored vessels in the United States.

The original was destroyed during World War II, but the vessel NCBJ will be boarding in San Diego is a near-perfect replica built in 1995 at a cost of more than $6 million. 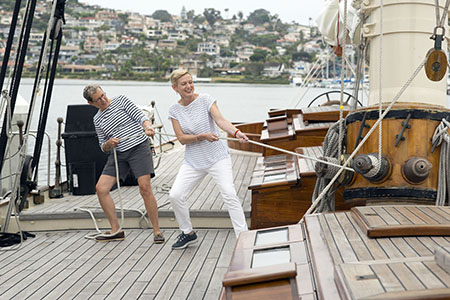 NOTES
The Marriott Marquis Marina is located on the backside of the hotel behind the swimming pools and Roy’s Restaurant. From your guest room, allow 15 minutes to walk to the Marina Gate.